On Tuesday, September 16, the United States Census Bureau released a report titled, “Income and Poverty in the United States: 2013.” While the report found that the official poverty rate of the United States decreased in 2013 for the first time since 2006, the number of individuals living in poverty was not statistically different from 2012. This finding follows a trend of slow recovery for America’s working and middle classes.

“Historically, the poverty rate has moved up and down with the unemployment rate – when unemployment increases, so does the number of people in poverty,” says DMARC Executive Director Rev. Sarai Schnucker Rice. “But while the unemployment rate fell by 23% between 2010-2013, the poverty rate has fallen much more slowly. For example, the number of people living in poverty has fallen only 0.5% from 2012 to 2013. For DMARC, this means that the good news of increased employment is tempered by the fact that 45 million people in the United States are still living in poverty, and one in three of them are children.” 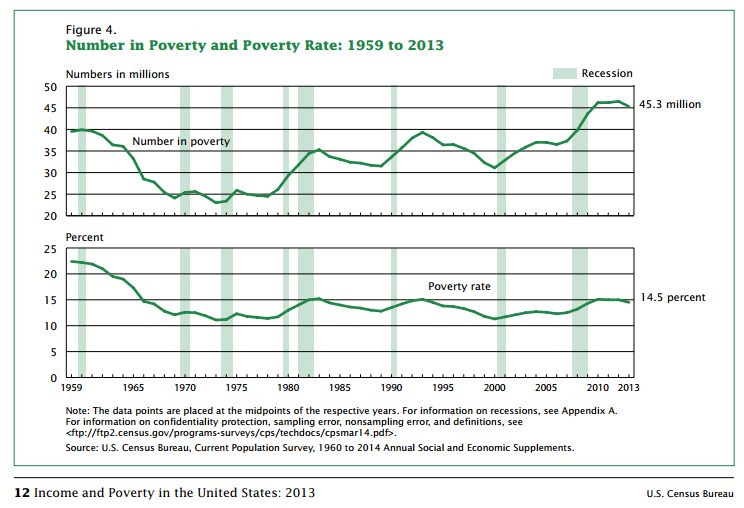 The topic of income inequality is mentioned in the report, as the income gap continues to grow. Families impacted by the recession of 2008 haven’t seen substantial positive change following the economic downturn. From 2009-2012, average inflation-adjusted income per family climbed 6%. However, the top 1% of earners in America saw 95% of these gains, while the bottom 99% saw their average income grow by only 0.4%. This is especially important considering 8% of average household income was lost in the recession. For the working class American, the “recovery” is little to none. This is not just a national issue, but one seen locally in Des Moines.

“The DMARC Food Pantry Network, which consists of 12 food pantries in the Greater Des Moines Area, has experienced this report first hand,” said DMARC Food Pantry Network Director Rebecca Whitlow. “We are currently serving approximately 4,300 families each month. That is a 15-20% increase in the number of families receiving food assistance through the Network compared to the same time period in 2013, when the Network was averaging 3,700 families each month.”

The need for food assistance continues to rise in our community, and families that were once financially sound and food secure are now reaching out for help.

“Since January 2014, DMARC has served over 2,400 families that say they have never had to use a food pantry before,” said Whitlow. “This is a disturbing trend in our community when families that were previously able to make ends meet are now in need of food assistance.”

Other alarming statistics from the report include the fact that during the 3 year period of 2009-2011, 31.6% of the population had at least one spell of poverty lasting 2 or more months. Additionally, 30.6% of single-mother homes are in poverty, one of the family groups that DMARC concentrates on serving.

“With this newly released data on poverty, readers may be asking, ‘What can I do?’ or ‘How can we help?’,” said DMARC Development Director Kristine Frakes. “We can start by recognizing that behind every statistic is a real person that is in need of short-term help. That in a room of fifty people, seven or eight may be friends, neighbors, or co-workers whose families are “making do” or “doing without”, and are one pay day away from becoming homeless or a tank of gas away from losing a job. Getting past the notion that people experiencing poverty and hunger live somewhere else – anywhere but here – is a start.”