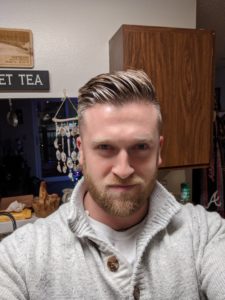 Daniel Beck is the Data, Analytics, and Program Coordinator at DMARC. Daniel joined DMARC during the spring/summer of 2010, initially as a volunteer assisting with some construction in the former warehouse, and was hired as staff later in the summer that same year. Daniel’s role within DMARC has been ever-evolving as the organization itself evolves and expands its reach and impact on the community.

Daniel has an educational background in nutrition and exercise science, and worked in this field as a nutrition advisor and personal trainer while attending Northwest Mississippi Community College and University of Mississippi. He began work with DMARC shortly after moving back to Iowa, leaving his position as a nutritionist soon after. Daniel is a passionate advocate for communities in need, particularly in the areas of nutrition equity, and medical/mental health access.

In his time away from work Daniel loves cooking (decently), reading, listening to podcasts, playing quite a few sports, exercising, storm watching/chasing, stargazing, and listening to music.

What drew you to DMARC originally, and how has it changed since then?
Originally I was just volunteering to help out with building some pallet docking space in our old warehouse. Not long after that I was hired to a part time position. As the mission, size, and reach of DMARC grew dramatically, I was hired into what evolved into my current position in 2013.

What originally attracted to me DMARC was the mission itself, and the recognition that there was greater need in the Des Moines area than was very well known. I had been volunteering in a similar, but smaller, organization in Mississippi while there for college, and the transition to DMARC was just a natural move.

My position and job description has been steadily evolving year after year since that time, and we are fortunate enough to have hired some wonderful people to fill positions that were formerly attempted part time by myself and several others.

What do you like most about working at DMARC?
It allows me to grow and expand on relationships throughout the community, in a way that many work environments do not. Whether I am doing onsite trainings at a pantry, meeting with community leaders, or working at a pantry itself and meeting with individuals receiving assistance, I greatly enjoy learning more about the community through as many different lenses as possible.

What is your proudest moment at DMARC?
I am always proud that as an organization we are able to help fill a need that is often times misunderstood or overlooked. I do not think I can point to any one moment that I am most proud of, per se, but anytime I am able to see and hear about the difference our network makes in the lives of so many individuals, it makes me very proud.

What’s a fun fact about yourself that others might not be aware of?
I like to think I’m a pretty open book, so there is probably not much that those that know me are not aware of. However, I once finished #11 out of over 4,000,000 people in a Seinfeld trivia contest. To this day I am still not sure if I’m actually proud of that or not…

Do you have any hidden talents?
The only reason this is “hidden” is because I took a good deal amount of time off in my life from doing this; rollerblading. I used to do some competitive type roller blading and street hockey when I was younger, and I bought a pair again last year and discovered I can still do that really well. Though the falls are markedly more painful now.

Before working at DMARC, what’s the most interesting job you’ve ever had?
I was working as a nutritionist and personal trainer for a while prior to moving back to Iowa and working at DMARC. Though more mundane than some people think, that job offered endless interesting stories and no shortage of entertaining days, including a future NFL player that I was strength training dropping a dumbbell on my toe.

Where is your favorite place in the world to be?
Oak Island, North Carolina. Vacation place for me since I was born, and still my favorite place to go.

What did you want to be when you were growing up?
A professional soccer player.

If you could use one famous movie line to describe yourself, what would it be?
“Is this a…? What day is this?” – The Big Lebowski; also, “There is good in this world…and it’s worth fighting for.”