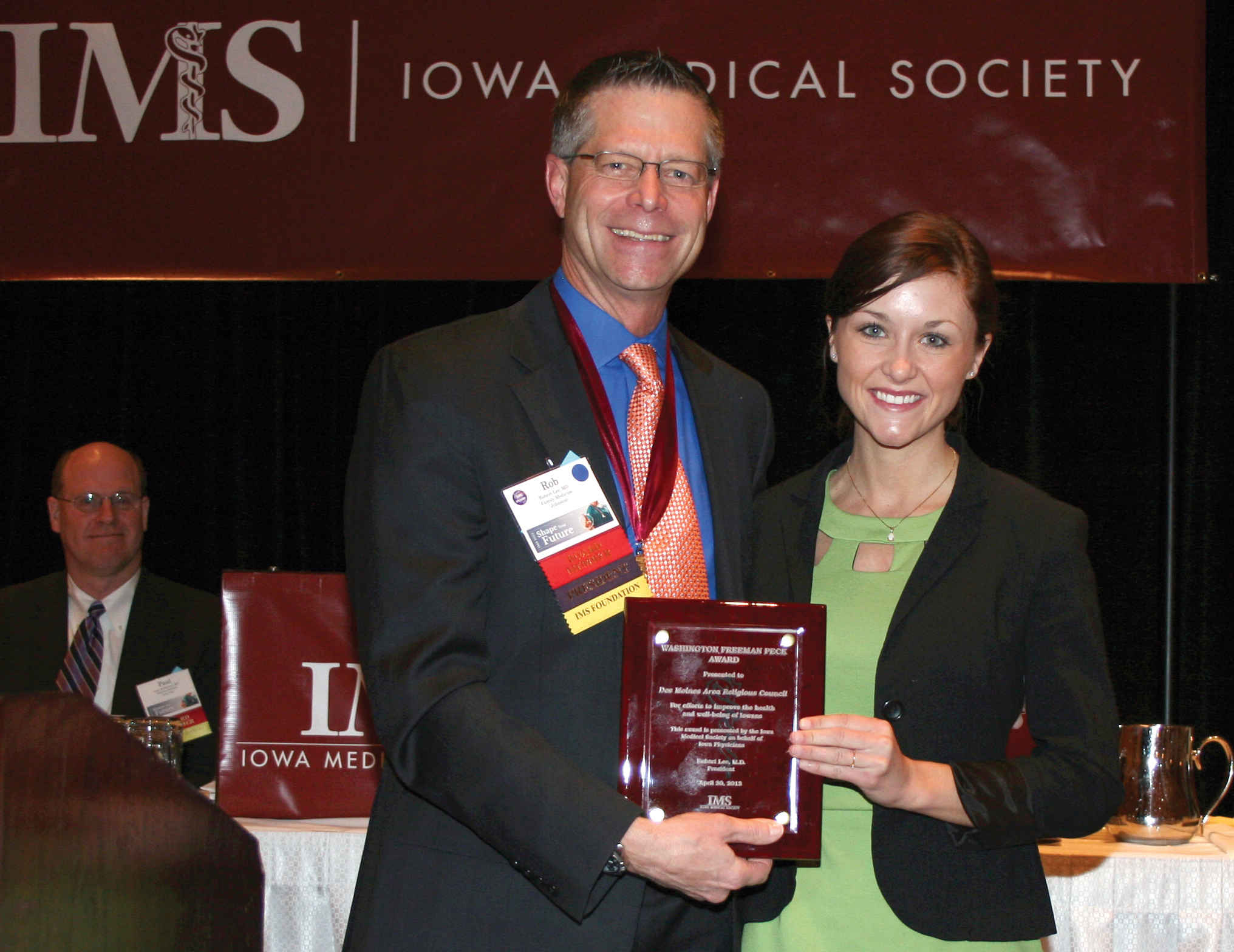 Pictured at left is DMARC Board Member Caitlin Oponski as she accepts the 2013 Washington Freeman Peck Award from IMS Past President Robert Lee, MD, at the Iowa Medical Society’s Annual Meeting in Iowa City on April 22, 2013.

Reprinted from the April 22, 2013 news release from the Iowa Medical Society.

The Des Moines Area Religious Council (DMARC) is the recipient of the Iowa Medical Society’s 2013 Washington Freeman Peck Award, which is given annually to an organization that makes significant contributions to public health.

The Iowa Medical Society selected DMARC for their work to end hunger through their food pantry network in central Iowa and their MovetheFood effort which focuses on providing nutritious food and fresh produce to people in need.

DMARC has the largest food pantry network in Iowa with 13 separate pantry sites in the greater Des Moines area, a centralized warehouse and numerous community partners. For the last 30 years, DMARC has continued to build on their services by using surveys and mapping technology to find ways to improve access to food and the types of food offered to their clients. DMARC’s MovetheFood program works to provide fresh, nutritional food to help combat the consequences of lack of food and poor food choices, such as an increased risk for chronic disease and diabetes.

IMS Past President Robert Lee, MD, said DMARC has taken an innovative approach over the years to ending hunger. “As physicians, we applaud their focused efforts to provide nutritious food that promotes the health and well-being of people in need.”

DMARC Board Member Caitlin Oponski and DMARC Executive Director Sarai Schnucker Rice accepted the award at the IMS Annual meeting in Iowa City. DMARC is the acronym for the Des Moines Area Religious Council, an interfaith organization with a core membership of about 140 congregations from four faith traditions.

The award is named after Dr. Washington Freeman Peck, a pioneering young physician who served as the 25th President of the Iowa Medical Society in 1876.

Past winners of the Washington Freeman Peck Award include Camp Hertko Hollow, Iowa Legal Aid Health and Law Projects, the American Red Cross, Volunteers for the Free Clinics of Iowa and the March of Dimes.

The Iowa Medical Society is the professional association representing over 5,700 Iowa MDs and DOs. The core purpose of the IMS is to assure the highest quality of health care in Iowa through our role as physician and patient advocate.

No Replies to "DMARC Wins Award for Contributions to Public Health"