Joe attended Westwood College and Lewis University studying Criminal Justice. Joe relocated to Des Moines in 2012. While never seeing himself as an Iowan in the past Joe is now a proud transplant, with deep roots in Iowa.

Joe enjoys being outside, wandering around the metro thrifting in his time off, along with cooking and watching documentary films.

What drew you to DMARC originally, and how has it changed since then?
When I originally came to DMARC, I was looking for a change in career. I have had different jobs before, however never felt fulfilled. I had little knowledge of what DMARC’s role in the community was, other than they helped people with food. Prior to DMARC I was working in Loss Prevention, and saw so many people stealing food and being punished for it. I wanted to be part of the solution, rather than on the punitive end.

DMARC has grown since I started in 2013, I am so grateful that I have been able to grow with DMARC. The passion of the mission and the innovation of the service that we provide, keeps me coming back every day. We have a team that is more like a close family. New ideas are welcomed and encouraged.

What do you like most about working at DMARC?
DMARC encourages thinking outside the box. The leadership allows for autonomy within your role in the organization, while having the support of the team. The cohesiveness of the organization is unfathomable. The support of the leaders with their open doors is unheard of. I have had many different opportunities to do new things while at DMARC, from being interviewed on a morning news program to responding to disasters in our community. The wide range of “hats” to wear keeps life interesting.

What is your proudest moment at DMARC?
I have two proud moments at DMARC. One would not be possible without the other. I was given the opportunity to take a leadership role with the launch and expansion of the Mobile Pantry Program makes me proud of our accomplishment as an organization. It all started with a sketch and a conversation. Having the program grow from an idea to three Mobile Units was nearly unthinkable.

On July 2nd, 2018, at 2:35pm, DMARC received a phone call to respond to an emergent need in our community. Flash flooding had devastated many parts of our community. Friends and neighbors of DMARC needed our help. DMARC was able to jump into action and change gears to provide our community with food, a basic need. I am proud that we were there. I am proud that we were able to help when, I feel, people needed us the most. It was long emotional hours, however it was worth every moment of it. I will never forget the small role we played in these people lives. 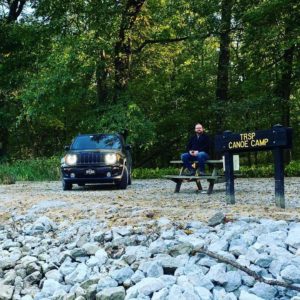 What’s a fun fact about yourself that others might not be aware of?
I am actually quite the outdoors person. I have started campfires by rubbing two sticks together. The longest I stayed in the outdoors was 11 days on a canoe trip in Canada.

Do you have any hidden talents?
I really don’t keep anything hidden.

Before working at DMARC, what’s the most interesting job you’ve ever had?
I helped run the family concession trailer while in high school. So DMARC wasn’t my first “Food Truck” experience.

What did you want to be when you were growing up?
This is a question that may never be answered for me. At one point I wanted to be a Marine Biologist, another point I wanted to be a teacher, then work in Conservation Law Enforcement. Right now I am happy where I am at, even if I never thought I would be working for a nonprofit.

If you could use one famous movie line to describe yourself, what would it be?
“Never take an elevator in city hall.” – Harvey Milk